The sun is shining brighter for Dynamics AX Techies!! :)

Wish you a Happy Easter!

As I was tweeting this morning, I happened to stumble upon this news and thought to share it over here!

For Dynamics AX professionals and for the aspiring ones, it's going to be a brighter future. Suddenly, there's a good demand all over the globe for techies experienced in Dynamics ERP (Dynamics AX being the most sought after ERP).

Some of the takeaways from the above news are:

a. Full-time technical architects working on Dynamics stand to earn a 14% salary increase

c. The average freelance wage increase over the next year is 12%, and that is so attractive that 39% of full-timers would leave their current jobs to freelance.

e. Nearly half (45%) of those looking to change jobs would consider moving to another country, with the U.S., U.K., Australia, Canada and Germany scoring as the top choices.

f. Most jobs related to Dynamics offer laptops, bonuses, a mobile phone and health plans as standard perks. A significant chunk (20% to 50%) also offer life insurance, dental insurance, life insurance and free Internet access, and they give workers the option to work from home.

So, all looks exciting at the moment for people working on Dynamics AX :), Happy Daxing!!
Posted by Dilip at 3:22 PM No comments:

I realized this post was sitting in my drafts folder for a while now. This is not going to be an AX post but an interesting experience on troubleshooting SSRS Configuration connecting to an external database.

For one of my customer, I have developed a series of SSRS Reports to extract data from a third party provider - Intersystems, http://www.intersystems.com/trakcare/index.html who specializes in HealthCare Information Systems.

To give a bit background, Intersystems uses Oracle database for their healthcare systems and inorder to extract data from their systems, I had to create a Linked Server connection in SQL Server which talks to Intersystems ODBC Driver (DSN). The IT team at my customer end had installed the 3rd party ODBC Driver on the box where SSRS was installed.

I was able to connect to their database using BIDS and the report rendered without any issues. However, when I publish the SSRS report to Report Server and then try to browse the report via report URL, it throws out this error "ERROR [IM014] [Microsoft][ODBC Driver Manager] The specified DSN contains an architecture mismatch between the Driver and Application”

Since we are using SSRS reporting we would need both 32-bit and 64-bit ODBC drivers of Intersystems as In SSRS, the Report Manager and Report server are 64-bit components and BIDS Environment (Development Studio of SSRS) is 32-bit.

After few hours of research on this error and by going through the forums and InterSystems website, it seems like they have a 64-bit ODBC Driver available. The 32-bit driver which we are currently using is the version released in 2008.

I downloaded the 64-bit Cache 2008.2.6 from their FTP site  and installed it on our SSRS box ftp://ftp.intersystems.com/pub/cache/odbc/ and this fixed the error

Hope you are doing well.

I had to replace the existing standard filters which comes with EP AxGridView to custom textbox filters. And, for this reason I had to apply the filters via code. I got a good idea by seeing this useful blog on how to achieve it http://blogs.msdn.com/b/epblog/archive/2008/11/17/filtering-a-dataset-from-code-behind.aspx

There was a small hiccup while referencing FilterCondition and Typ as I didn't knew the namespace, so before we use the filterObject and conditionType objects, dont forget to declare the below highlighted namespace.


Dear Friends,
I'm stuck up with this issue while implementing custom security policy with DAX 2012. Hope to gather some feedback from my blog post if anyone has come across this issue before. If not, any suggestions are welcome. If I come across a solution, I will come back and update this post.
I have posted this query in Microsoft forums over here
Hi,
Greetings!!
A brief background - We are using custom security roles and policies (using XDS Framework) in this implementaion. We have created a security policy query on DimensionAttributeValueCombination table as shown below, it's a simple filter on LedgerDimensionType and DisplayValue (Please see the ranges in Screenshot 2) 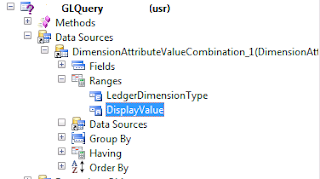 Now, going one level up, to security Policy,  Please see the below screenshots for the definition of our Security Policy and Constrained tables within it. 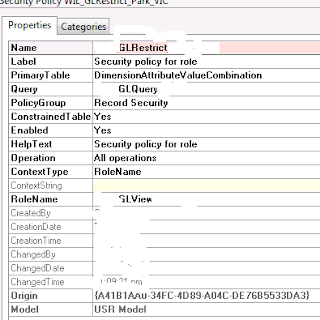 As you might have already seen in Screenshot# 3, the security policy is attached to ContextType RoleName and we have added a test user to that security role. So far, all good.
Now, when the user with the above security role logs in to AX and navigates to GL > Trial Balance, as expected the accounts are filtered based on the query ranges i.e. it brings all accounts which ends with -1-003 and -1-007 as expected. All good here.
But the trouble starts, when we go to forms like Free Text Invoices under AR, The user with the above role can create a new free text invoice header from AR > Free Text Invoices, but when they go to create an invoice line and select the main account from the drop down, the system just hangs, Also we have experienced similar issue when we try to select an account from GL > General Journal I tried to debug and see the SQL query behind the scene via SQL Profiler and it tells me that the Security policy is in force and it's trying to do an insert into DimensionAttributeValueCombination table, but failing to do so because of the Security query, for testing purpose if i remove the security role from the user's login or try posting the free text invoice as a system admin, it works (because obviously the security policy is not in force)
Is there anything being done wrong above? I also tried disabling the security policy via code i.e. going to CustInvoiceform and using xds.SetXDSContext(0." ") to bypass the security, but this is not working. I also tried disabling the security policy in table methods before insert or validatewrite, but no results.
I checked the forums before posting here and found some interesting posts on XDS Framework, but haven't been answered fully. Like the one where we can have a dynamic query would be nice to have.
http://community.dynamics.com/ax/f/33/t/97472.aspx

I have found a workaround, by taking a different approach to the scenario and instead of attaching the Security Policy to the Role directly, I changed the ContextType to “ContextString” from the previously defined “Rolename” and put a ContextString called “DNTestSec”.
(Step 1) 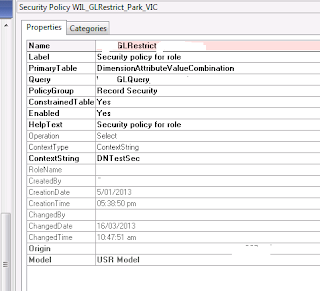 I then attached this ContextString to the role and query. (Please see below Step 2 and Step 3) 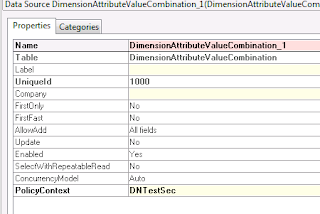 After making this changes, the below code makes sense, as it can enable/disable security at run-time because it can find the ContextSecurity string. (Below is a standard ax code which you can find in one of the DirParty* forms in AOT)

In conclusion, the limitation is we can't have both RoleName and ContextString both enabled on a SecurityPolicy, because as soon as you enable "ContextType" property as "RoleName", ContextString gets disabled.

And with the above limitation, the only way to control security on-demand is through code using ContextString as shown in the above steps.

This morning, I changed the credentials for one of my service "Sharepoint 2010 Tracing Service" to a domain account from the initially set local service account.

The change went successful which means I was able to start the service with the new account. However, the Sharepoint log files were just showing 0 KB. The log entries were not getting populated in the log file.

Please see the blog below for a detailed reference.
http://www.christianfredh.com/blog/post/Fixing-issue-where-SharePoint-2010-logs-is-0-kb.aspx

Hope you are doing well.

Four years ago, I had an issue installing Enterprise Portal in a distributed environment mentioned in my blog post here.

There's an article on technet about this error and troubleshooting http://technet.microsoft.com/en-us/library/ee355087(v=ax.50).aspx 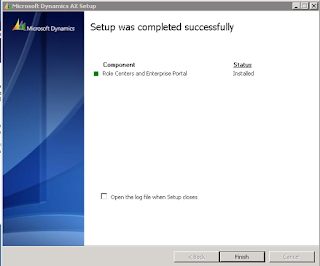 Hope the above link and screenshot will help someone out there troubleshooting EP Setup.

As I was tweeting today, I found this interesting piece of news which I thought to share in my blog. Couple of years back, I worked on a big retail implementation where I had to integrate Dynamics AX 2009 with IBM MQ Websphere via Connectivity Studio (an add-on written in X++ and provided by To-Increase) and we wrote custom interface in X++ using IBM MQ Dll's

Fast forward, with AX 2012, now IBM has released it's own adapter. This will be very useful for businesses planning to do an integration with Dynamics AX and IBM MQ,

This white paper describes new and improved capabilities for scheduling workers in the Project management and accounting module in Microsoft Dynamics AX 2012 R2.