Official Dynamics AX 2012 Help Content - Where to find it?

a. Help documentation for System Administrators

I was looking out for shortcut keys to switch between Application and Development workspace in AX 2012 which bought me to this msdn website http://msdn.microsoft.com/en-us/library/aa623612.aspx

Since I use AX 4.0, AX 2009 and AX 2012 often, I thought it will be good to consolidate the common shortcuts and bookmark it so I have a one-stop place to come and look at, as my memory with respect to shortcut keys is not so good :-). If you are one like me, I recommend bookmarking this page as your favorites!

The following shortcut keys have changed since Microsoft Dynamics AX 2009:

I will come here and append to this list as and when I find new shortcuts or frequent shortcuts in my day to day work. Happy Dax'ing with shorcuts! :-)
Posted by Dilip at 1:09 PM No comments:

Here comes Video 7 which talks about Dynamics AX 2012 Performance. This video is from one of the best in industry, Sri Srinivasan who is the Principal Architect in Dynamics AX Team.

I have appended it to the existing list here - http://daxdilip.blogspot.com/2011/08/inside-microsoft-dynamics-ax-2012.html

Dynamics AX 2012 Licensing has undergone a major change compared to the previous versions. I scanned through it quickly and some of the key features which  I noticed are:

I'm just playing around Office Add-In for Dynamics AX 2012 on our Sandpit box. The component installed successfully but when I'm trying to launch the Add-In via Excel > Dynamics AX > Connection, it spits out this error shown below:

a. In Registry, the entry for ClientAOSServer in Office Add-Ins were not matching to the one in Client Config. I modified it as shown below, but still no luck :-( 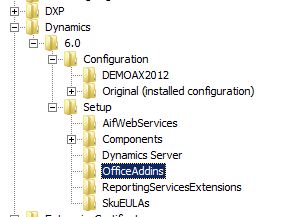 b. The Add-In works fine on the Partnersource VM. I compared the Excel version between PS and my sandpit box, the one on PS runs on Office 2010 (no SP1) and the one on my sandpit is the latest version of Office 2010 with Service Pack 1.
Excel Version on VM

Excel Version on our Sandpit box

c.  Although the System Requirements Guide for AX 2012 doesn't speak about Office 2010 SP1 but without SP1 the Add-In is not able to load up which I confirmed by performing the following on our sandpit box
- Uninstall the Office Add-In
- Uninstall Office 2010 SP1
- Install AX 2012 Add-In
- Load the Add-In, It doesn't Load at all, so nothing out there in Command bar, atleast previously I had the Add-In in the Ribbon bar
d. Tried some registry tweaks as per the community discussion changing the manifest value to file:\\\ but with no luck https://community.dynamics.com/product/ax/f/33/p/60614/111924.aspx?wa=wsignin1.0&PageIndex=2
e. Copied the entire folder C:\Program Files (x86)\Microsoft Dynamics AX\60\OfficeAddins from the PartnerSource VM Image and replaced the contents on my Sandpit box
f. Replaced the registry entries related to Office Add-ins (HKEY_LOCAL_MACHINE\SOFTWARE\Microsoft\Office\Excel
and HKEY_CURRENT_USER\Software\Microsoft\Office\Excel on my sandpit box with the ones from VM, Restarted the box but still the same error of Object Reference not set....
g. Now, my laptop running on Win 7 Enterprise 64-bit has the same Excel Version of Sandpit box(that is updated with Service Pack 1).
I thought of installing AX 2012 RTM (AOS, Database, Client, Office Addins and Remote desktop services) build 6.0.947.0 (See here for the AX 2012 Build numbers http://daxdilip.blogspot.com/2011/08/troubleshooting-dynamics-ax2012-rtm.html) on my laptop to test the Add-In and to my surprise, the Add-In gets loaded here without any errors of "Object reference not set to an instance of an object)
So, after all the exercise performed above, I can summarize that image on Partnersource which has AX Beta (Build No - 6.0.852.78) is compatible with Excel Version of 14.0.5128.5000) and the Add-in works good but not the case with Office 2010 SP1 (See below table)

There's a thread running on the Dynamics Communities where people are facing the same issue https://community.dynamics.com/product/ax/f/33/p/60614/111924.aspx?wa=wsignin1.0
Waiting to hear from Microsoft on this one..??
Posted by Dilip at 5:51 PM 8 comments: