DAX 2009 and a brief note on Version Control

This is regarding AX development environment setup for different version control options which is bundled with DAX 2009.

Dynamics AX 2009 IDE can be integrated with any of the following version control systems:

A. MorphX Version Control System (VCS)
i. Out of box version control integration available with DAX 2009
ii. Developers can use shared AOS
iii. No need of Team Server *

i. Local copy of AOT stored on each developer computer in repository folder
ii. Each developer machine needs to have AOS and database server (So, we need to have a Windows 2003 Server for each developer since AOS installation’s pre-requisite is Windows Server 2003)
iii. Additional server for installing VSS/TFS Server
iv. * Team Server is required

*Team Server also known as Team ID Server issues ID’s to AOT objects to make sure that all ID’s are unique when we work under version control. Team Server is a required when we use VSS/TFS as our Version Control System.

We need to evaluate our version control requirements for our projects based on the above info. What I feel is integrating with VSS/TFS would be a costly affair (considering the server requirements) but the benefits which we get is a proper build process in place. On the other hand, using the internal Morphx VCS, we get the benefit of a shared AOS but we won’t be having a proper build management. For e.g. suppose AX Crashes then the VCS is also gone with it.
Posted by Dilip at 1:19 PM No comments:

http://www.connectwithlife.co.in/vtd/default.aspx
Posted by Dilip at 2:56 PM No comments:

Email ThisBlogThis!Share to TwitterShare to FacebookShare to Pinterest
Labels: v'

I was working on a small POC which consumes a WCF Service to update DAX 2009 Employee data.

This WCF Service in-turn consumes a legacy ASMX Service to talk to a different application and loads the data from that webservice. And, later the data is updated to DAX 2009.

These are the 2 steps:

Step A: Windows Mobile Loads the data from a WCF Service which in turn invokes the Business Logic Layer which calls the Data Access Layer (this layer consumes the legacy asmx webservice of the external app) 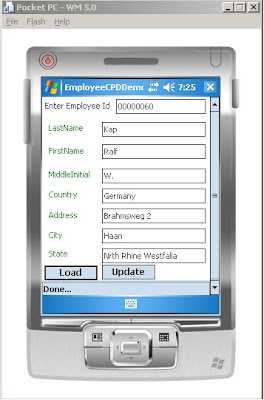 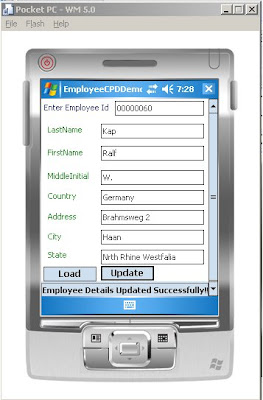